Born and raised in the Bay Area, David Hechim immediately took to the drums the moment he was tall enough to pull the wooden spoons from the kitchen drawer. He went on to sit behind the drum kit for countless regional acts like Voyeur, Steamer, Mutha Jones, bigSKINNY, Multiply, Straggler, Cobrabelly, and Sony Recording artist Spike 1000. David was ordered to report for vocal duty for My Heavy Memory when he was caught fronting The Niles Memorial Marching Band, a project that most of the crew from My Heavy Memory were all too familiar with. David's influences are mixed, pulling from the likes of the Deftones, Donna Summer, STP, The Three Stooges, and Bill Hicks.

Born in Lakeport California you could say there was allot of pick'n and a singin in the family room. His mom was a concert violinist/pianist, and brother Tim a state banjo champion. After fooling with piana and violin Todd got a drumset and wanted to be Peter Criss. That's when he destroyed his neighbors in his apartment complex and decided to turn in his Ludwig kit for an Ibanez Destroyer to become Ace Freely. Timeline of projects; Adolescent Revolt, Subliminal Hatred, Freak Gallery, Audio Mojo, Parking Lot Prophets and now My Heavy Memory. Major influences (other than Kiss) include Iron Maiden, VH, Dio, Rush, you get the drift. Then in the modern time Slipknot and Opeth really got him going and pushed him back to the studio to write heavy again! Everything he does in music is for his late mother Diane Moore who always pushed him to be an artist.

Born on the island of Terciera in the Azores Islands. His family immigrated to the small coastal town of Half Moon Bay just south of San Francisco. From a young age, Paul liked to hit things!! After numerous furniture sacrifices, he got a real drum kit! Influenced by the some of the greats of his youth, the Beatles, Stones, Zeppelin, and KISS, he went on to form the band Asylum in the mid 80's. Along the way he become a drum tech for numerous local and national acts in the 90's. Longing to get behind the drums with his own project, he met Todd and they formed Parking Lot Prophets which would morph into MHM!

Born and raised in Hayward, California. Eddie fell in love with loud guitars and blue collar hard rock bands of the late 70's and early 80's. Having been mesmerized by KISS, Eddie did a lot of backyard imitations of Ace Freely. At age 17 he picked up the guitar and started learning riffs to Metallica. In 1990 he joined Bay Area local act Intensity and honed his chops opening for acts like Violence. After teching on a Forbidden tour, his creative juices started flowing again. It wasn't long after that when guitarist and old friend Todd Galland hit him up and said "let's jam dude". They began writing material for a new band, had a shared vision, thus the act "My Heavy Memory".

Raised in the bay area metal scene along with Eddie and Todd. Mainly known for his bass skills in the bands Intensity and Dork.

Enter your email address below 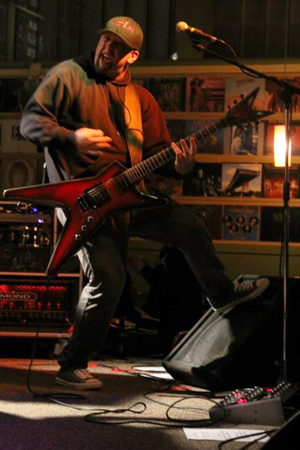